In section 6.8 of Dorst’s Guided Tour to PGA in step 2 eq(94) we have a motor that moves a line into another where lines have an intersection point. My example below gets a motor which moves line AB into AB1 but I don’t get the second point B1 from B with this motor.

It seems the distance \lvert A,B_1\rvert and \lvert A, B\rvert are not the same, so you should not expect the motor (which is one that rotates around A) to take point B_1 to B.

Two motors are visualized above. The green one (M) is the one you have. It takes one line to the other by rotating around their intersection point.

The pink one (M2) is the motor that takes the point to the point, and the line to the line.

Play around with it here : https://enkimute.github.io/ganja.js/examples/coffeeshop.html#-1kBrKM2W

Thanks for your quick reply. In the proof after eq(94) Dorst says the motor V_B leaves A’ invariant and rotates B_A into B’. I tried to do that, but, as you pointed out the motor M only rotates around intersection point A onto the line AB1, but it doesn’t move B1 to B while it leaves A invariant. So, I cannot get what is claimed in section 6.8 . Your M2 moves B1 to B, but it doesn’t leave A invariant (intersection point moves on the pink line). So, what is needed is the motor that in effect rotates line segment AB around A and stretches it at the same time so that point B moves into B1.

I don’t understand M_pp>>>AB in your motor. What geometric algebra operation is that?

That is shorthand for applying the motor.

The text talks about a motor that sends B to B1 exactly. Since all motors of PGA are rigid body motions, that means that the distance AB and AB1 should be the same. So you have applied it to an example that is incorrect, you could not have made B1 by an RBM. But I think I should clarify this in the text, you had me baffled for a moment. If you want the transformation you specified, you should use CGA: conformal motions can do this with their versors.

The setup (right under section 6.8) states:

Let us assume that we have three normalized labeled points A, B, C (not on a line), and that we know where an exact motor sends each of them, to A', B', C', with the same weights

this specifically requires A,B,C and A',B',C' to be congruent, that is with the following requirement on the distances:

This was not the case in your example, and hence no isometry (distance-preserving map) exists between the points you had. Notice however that it is still possible to find the motor that:

(i.e. you translate the point cloud as a whole, until one point corresponds)

(i.e. you rotate around the point from the previous step until that first line AB corresponds to A'B'. If additionally the distance \lvert AB \rvert = \lvert A'B' \rvert this will also align point B to B'.

(i.e. you rotate around the line from the previous step until the plane ABC coincides with A'B'C'. Again if the distance requirement from above is met, this will also align C to C'.

This technique is not just very geometric, it is also substantially more flexible as with the exception of A and A' all other points can be any mix of euclidean and infinite (ideal) points. I made a little writeup that aims to demonstrate that versatility: 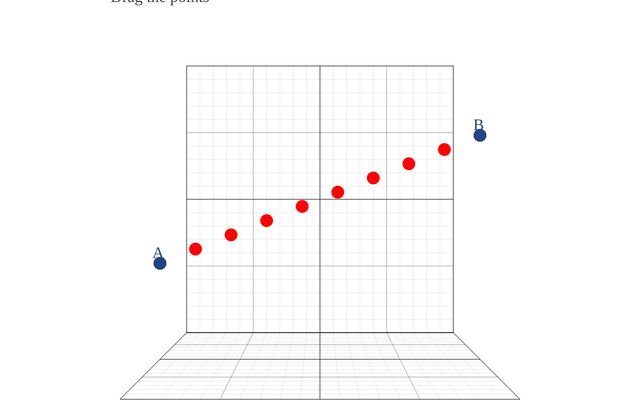 Over on the bivector.net discord chat, the question of how to build a PGA (Projective Geometric Algebra) version of the GLU lookat function popped up. In this notebook we'll build that function, making sure to do it in a way that maximizes the...

(those graphs are all interactive).

Thank you for clearing up my confusion. The sentence you cited did not ring a bell to me that it should mean that the points belong to the rigid body. I am an engineer, so, unless I see “rigid body” I don’t know what it means. I suppose “with the same weights” should mean that there is a constraint on relative distances of the points, but my training doesn’t have that. Also, I didn’t know that motors of PGA must be rigid body motions. Thanks again. My implementation reconstructing a motor from rigid body motion given starting and final position of 3 points works now.

Great to hear you got things working.

Each of these geometric algebras has a set of versors (=products of invertible vectors) with close connection to a transformation group, so one mindset gives you access to

In each case these representations are the most efficient way to handle that type of transformations, and all of them give you access to the associated (linear) Lie algebra. (i.e. where you can interpolate transformations).