Dear All, I cannot find the following reference mentioned in PGA4CS. Can you help me, please

Unfortunately, I’m banned from the discord where I posted most of my proofs of the inconsistencies. I don’t recall if these specific inconsistencies are due to Dorst or Stephen De Kenninck alone, somebody sent a screenshot so I need to rely on recalling it with other people’s screenshots: 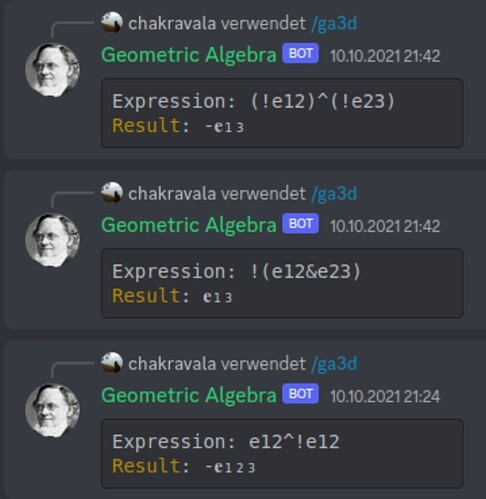 The first two results here are supposed to be equal to each other (-e13), while the third result is supposed to be positive (e123), demonstrating there are issues with their definitions and is not compatible with Original Grassmann.

Here is the result from my Grassmann.jl package, which is carefully based on the OG original Grassmann:

On the other hand, I do recall that one of the inconsistencies perpetuated by Dorst specifically is related to his definition of inner product. Dorst uses what I call the “conventional definition”, which is incompatible with the OG (original Grassmann) and the Hodge stuff. 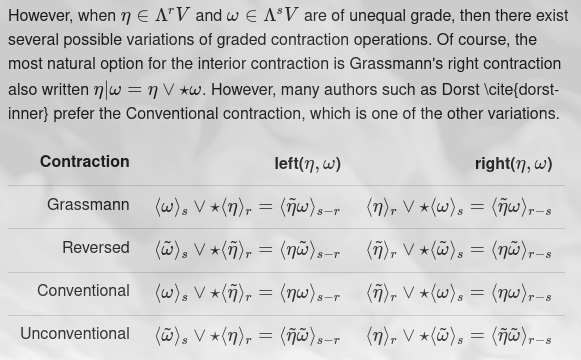 This table is taken from my documentation, I am the first person to fully disambiguate these inner products and figured out why Dorst definitions are wrong as far as being compatible with the Original Grassmann goes. Not aware of anyone else talking about this.

I do have a paper I wrote where I had this table in it, but I never officially published the article yet. Guess I should get around to publishing it.

Since I am not a prestigous univeristy professor and not in academia, people aren’t paying attention to what I have to say about Dorst’s and DeKenninck’s stuff. Maybe it embarrasses them that I found out these issues.