Expression Evaluator in https://bivector.net/tools.html for Scalars

I’m new to GA and learning GA by trying to implement the support for Swift Programming language for the same. I’m using the expression evaluator BiVector.net as a way to evaluate my implementations. I’m having tough time in understanding what should be the correct answers when we try to find inner and outer product of 2 scalars 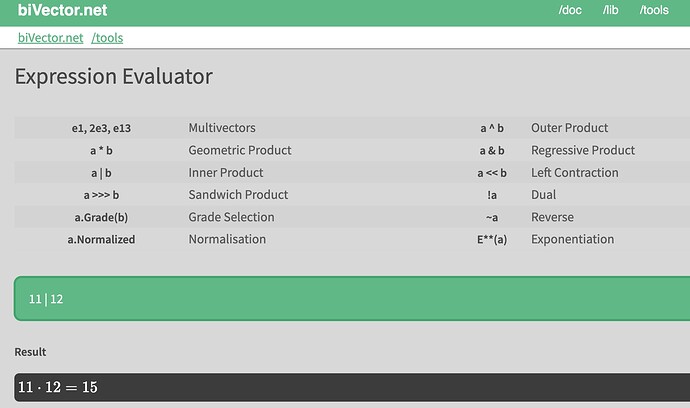 I’m not finding proper resource on how the Geometric products inner and outer products to behave for scalars? Or it is a bug in the tool? Any inputs will be helpful.

You can try using Grassmann.jl as an evaluator instead, it has a consistent implementation for scalars: GitHub - chakravala/Grassmann.jl: ⟨Leibniz-Grassmann-Clifford⟩ differential geometric algebra / multivector simplicial complex

For scalars, the tool interprets the expression in the usual Boolean manner. That is of course unfortunate. But indeed, for scalars the inner product is the lowest grade of the GP, and thus the regular scalar product; and for outer product the highest grade term - which is also the usual producr.
Avoid the beginners mistake of thinking that any geometric product is the sum of inner and outer…

Thanks @LeoDorst. Got it. Your talks listed in Bivector.net are really inspirational and motivated me to tryout the GA on Apple frameworks and ultimately build all the examples shown in Ganja.js in the Mac or ios App. I’m speaking ahead of myself now.

. Will keep you all posted in this forum with my progress.

Okay now I have the Geometric product, Inner product and Outer product sorted out in my code.
I’m yet to move things in to a newer git repo to make it public. But here is the draft version.
All the tables results are listed:

This file has been truncated. show original

Here are all the unittests for each of those cases:

I highly recommend avoiding the 0 index syntax in GA, it’s only going to cause confusion. Indexing in mathematics is not 0-based like it is in some programming languages. Mathematics notation has 1-based indexing, with 1 always being the first index. Your e1 is actually the 2nd basis element. Mathematicians such as myself prefer to have the last basis element square to 0 instead of the first element. Associating 0-based indexing with degenerate metrics is bad notation and the 0-based indexing is inconsistent with how mathematiciand do indices.

People who use 0-based indexing look to me as if they are a bunch of unexperienced people trying to follow some kind of trend, except the trend is stupid and it’s not properly consistent mathematical notation to associate degenerate metrics with 0-based indexing.

Hi @chakravala thanks for your feedback.

Using zero based index is more of a programming practicalities which is followed dates back to when the the computers were invented. We can compare this to how mathematicians use the term “Mathematical convenience” similarly we can say “Programming Convenience” in terms of implementations in a software. This helps to keep the code simple and understandable to people who come from programming background.

People who use 0-based indexing look to me as if they are a bunch of unexperienced people trying to follow some kind of trend, except the trend is stupid and it’s not properly consistent mathematical notation to associate degenerate metrics with 0-based indexing.

This is your personal opinion.

It’s not just an opinion, it’s a matter of making sure that people don’t spread inconsistent notation widely. Unfortunately, the Cambridge people and Stephen DeKenninck keep on perpetuating inconsistencies in notation and definitions, because they’ve already written books that are inconsistent mathematically, they cannot admit it so they keep on pushing inconsistent ideas.